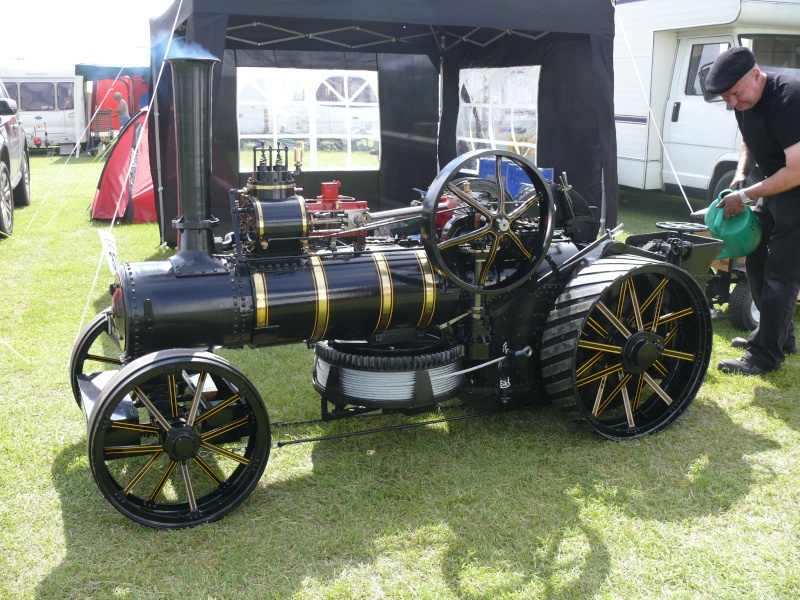 Very impressed with this one

Stunning, have always loved the size and scale of ploughing engines. I bet this was great to see in the flesh.

following on from your facebook post. Do you have any further indformation on what type of ploughing engine you have in mind for next year?

I am very interested and have already started to plan how the workshop will have to be re-arranged to get enough room for the build. I really hope this project goes ahead.

thats a lot bigger than i was expecting. i'd love a pair with matching plough, now that would be nice. there was talk of possibly doing another one after hector is finished, i'll hopefully be on a proper wage so will have money for something a little bigger, was talk of a 6" foden, but there sounds like theres a few other ideas in the pipeworks and theres still over a year to go

What dimensions are we looking at for this? And do you get a 50% discount if you buy 2?

Hi
Could be interested in a years time. I wonder if Dean will be doing BOGOF by then as could do with two.
Simon

Yes we have posted on Facebook and flagged the idea of doing a Fowler BB1 at the back end of 2014 (probably after the shows finish so around October 2014 start).

At the minute it is only in the discussion stage between Steve and I. Not only is it very BIG engine its also a complicated and this makes Steve slightly apprehensive.....My view is anyone who can do a 4" scale Hornsby Chain Track from design through to making all the patterns and then machining every component which once completed became probably the best miniature ever produced will be more than capable of designing a BB1 every bit as good and detailed as the Showman's and Road Loco's we've just done. I think the main real concern for both of us though at the minute is not whether we can do it's more about the price. From experience the more expensive an engine is the more it limits our sales as it just prices some people out of being able to afford it.

This engine without doubt will be costly and if we manufacture it then it WILL be the most expensive 4" engine we have ever produced. The patterns for large items like the main winding drum, flywheel and the cylinder block will be very expensive indeed. If we are going to do it right then added to this is all the other patterns costs and that's before we even start adding in design costs, materials and manufacturing.

All said and done though the more people who want one (or two) the cheaper we can do it for.

If enough people are genuinely interested we WILL do it, that i'm certain but a batch of 5 or 10 just won't pay.

So it's really over to every one who wants one to make sure they let us know........cos people power can make it happen.

25to30K sounds about right for an engine as complicated as this. You will have to a plough to match though. What a great way to get people together at shows so they can demo the engines ploughing. I would be very interested as long as the individual kit cost can be kept down, say do the engine over 48 kits? How about putting a poster up at the next couple of shows and see how many people you can get interested?

I could have a hard time deciding between a 4"SCC, 4" BB1 or the 6" Devonshire. Can anyone help me decide? And are there any further details for the SCC and Devonshire designs? I have not seen a product page for them?

Hi Forge
If you have a look at this thread it should give you some details about the 4" SCC.
http://traction.forumotion.com/t1556-the-next-4-engine-burrell-single-crank-compound
If you have any more questions please ask.
Regards
Mark

Rickster wrote:I've been badgering 'em for years to do a 4" BB1 !  C'mon guys/gals - need at least 10 to put one into production.