Hi Nick, and thanks.

No not yet, I've had the simplify valve off checked and refitted it.  I'll be trying to steam again On Sunday if the weather is ok.  If it still fails I'll be taking the valve off and blanking it off before trying again.   I'll also loosen the HP valve cover as suggested by Kevin and see if the regulator is holding when closed.

Ive fingers crossed for the weekend but my expectations are not very high at the moment, and time to play with it at the moment is limited.

Will keep you posted, and if you find the answer would be interested to hear.

I am doing all the same checks as you but without good weather steaming has been delayed twice. I have fitted a stronger spring to the valve.

One thing I did notice and have corrected is when the regulator is fully shut off the starter button and rod connecting back to the valve moves forward enough to slightly open the valve port.

I had to shorten the small rod that travels through the valve to stop this from happening as I couldn't wind the rod back anymore. With the original weak spring in place the valve would have been cracked open enough to let by.

It would be worth checking this on your engine also.

Looking at the photo of the regulator plate you're lapping the bottom face - the valve seals against the face with the countersinks ie the other side ........
Have you put a gasket - 1.5mm thick underneath the plate with a thin smear of foliac paste (steam seal) to seal it against the cylinder block ?

I had mine off at the weekend and re-lapped both the plate and valve, the front countersink to be cut a little deeper as the screw head was slightly proud.
Make sure the valve overlaps the steam port by at least 5 -6 mm when the regulator lever is in the shut position.

If the simpling (starting) valve is also suspect, wouldn't you think STW would have changed to a stronger spring by now as most people seem to have the issue ??????????

The modified SS regulator plate does not have countersunk screws as the screw holes are for "Jacking" the plate free of the sealant below. The plate can only be polished on one side as on the other side there is a boss which locates the plate in to the expanded steam port in the block (1st production blocks). Some builders have modified the plate with countersunk holes and tapped their blocks to screw the adapter down.

So rob is correct in his polishing activities.

The starter button valve can be a problem. But by de-burring the hole, rounding the edge of the valve stem and not over tightening the o-ring retaining nut. The valve can be made quite free moving. Also make sure the ball has a good sharp seat in the valve face.

Ah, didn't realise there were two versions of the stainless steel regulator plate, mine came with the boss to locate in the cylinder block and the holes countersunk.

Make sure there is a little clearance between the nut on the regulator rod and the valve so that the valve is free to float and sit squarely on the plate.

Ran my engine on air today and had no by pass of air throuh the block and no free running.

I had run the engine first having blanked the starter off so I knew it was the issue.

new stronger spring and giving the ss ball a good sharp wack has cured the problem.

Hopefully yours is as easily corrected.

Looking forward to seeing your 'mini mayor' in the flesh. Come and park it next to the real one if we're at the same rally.

Time for the build has been very limited over the last 12 months but as many will know I have been having a bit of a problem with the regulator, this was down to me as in my haste to carry out the modification and send back the equipment I failed to lap in the stainless steel modification plate oops.  This meant it wouldn't seal.  After lapping and finding the engine would still start when it reached 50psi with the regulator closed I was almost at the point of shipping it off to somewhere like Berrybrook to get it sorted out as it was becoming outside my area of knowledge to resolve.  After scratching my head wondering why, I moved the lever very slightly and it stopped, therefore the puck needs a small adjustment. Great news, and my motivation is back to get it finished ready for next season.

I have fixed the flywheel so it has now stopped moving on the shaft, and the water pump is now also working correctly having sorted out the problem with the gasket which was stopping the ball seating properly. The injector wouldn't pick up so I need to have a closer look at it, and test the safety valves lift before arranging a steam test.  In June I prepared for battle with the DVLA, 8 weeks later and several phone calls later and she is now road registered, another job crossed off the list.

Jobs to do....1) the LP reverse eccentric is loose and I think that’s the knock in the video. 2) even at 150psi the injector wouldn’t pick up. 3) File down the rivets in the chimney as the extension won’t fit 4) cut the notches in the reverse lever crescent (when I find how to correctly position them) 5) loads of lining, 6) fir the cladding 7) give it a good clean 7) see what have got for the exciter and dynamo and fit what I can (still awaiting some part for this)  5) anything else I find not on the list, and build the canopy. 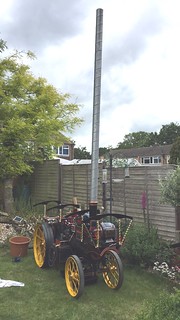 edit - I apologise for the quality of the video.  It plays fine on the computer, but when uploaded to youtube it has some strange effect on it.

Could well be Mark. It got progressively worse as the day went on, so something has come loose. I could feel movement on the eccentric as it turned over but will be checking everything before running again to make sure all is well.

If its the standard injector that they have been using through out they are normally very good, check for air leaks on the in coming water, and try running it at a lower pressure. Other problems can be the ball in the clack not lifting far enough. Mine tends to not like higher than 110psi but will work right down to 40psi and some times lower if I keep the water trimmed.
Try pouring water over it and the water valve while its running as this may show up any air leaks in the pick up.

As Livesteam mentioned above re injector.

I had bother with mine.

1. air was getting into the water mix via the connection between the injector and the water valve from the tender. I removed the threaded connector and packed it well with graphite sealant and wound it back on.
I found this problem pouring water over the area when running the injector and it would start to splutter when water was pored as though it was picking up but was restricted.

2. The amount the ball lifts in the lack has been adjusted.  After giving the ball another 3-4mm of lift the injector now works well.

Hope this helps you out.

I don't think the knock is an eccentric. Its too loud and appears to be created on the high pressure side on its furthest throw (when the piston is at the front of the block). Does the motion turn over smoothly by hand when at full temperature/expansion?
This should give you an idea where the knock is located as may not be as pronounced when cold.

Thanks both, I didn’t get to the injector today but found a few things that were loose.  The engine turns over nicely both hot and cold with no obvious tightening.  I did find one of the other eccentrics was very loose.

Taken apart, retightened and locktighened in.  Also fitted the whistle chains today, and started the lining on the exciter. 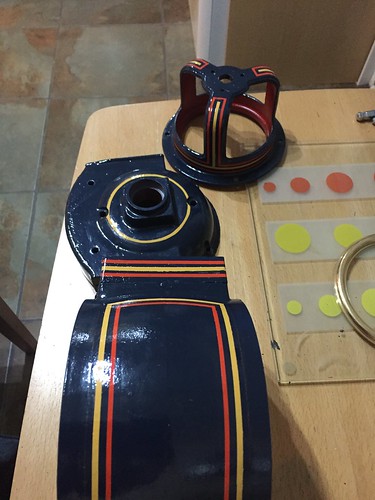 That knocking/banging noise sounds like the piston hitting the back of the cylinder block. I noticed from an earlier pic that the piston rod is screwed right into the slide block. It should be adjusted so that the front of the piston is flush with the back edge of the inlet port on the cylinder on the front of the block. If it's not and further back then that could be the noise. The instructions were silent on this matter and I can understand how one would assume it should be screwed right in.