I have finally taken the plunge and moved my front wheels in and it has improved the look of the engine. It will be even better when I move the mud guards in to match. This came from a discussion with the owner of a MW Foden at GDSF last year, all you need to do is take the hubs off, knock the studs out, put them back on the other way round and like magic it steers perfectly.  The only snag mentioned was the re-welding of the pin on the steering arm to take it away from the tyre.

Needless to say there was far more to it than that, I suspect the owner had subbed the work out to someone else.  I did some research on line and in books looking at the track of the wheels in relation to the smoke box diameter and from that reckoned that the wheels were at least 60mm too far apart.  Just turning the hubs around would have moved the wheels in 100mm, 40mm too narrow, which would have looked just as odd. 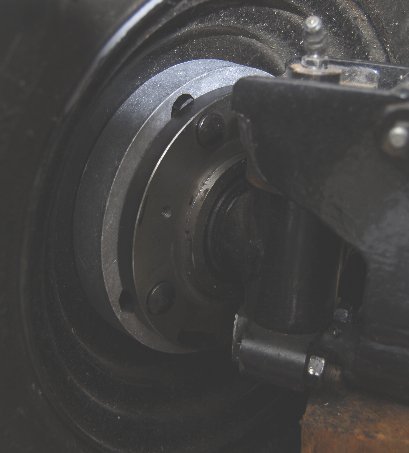 I sourced a pair of 20mm wheel spacers and extended studs, this was relatively easy as the original hubs were from a BMC Mini.  Once you try and go about the job however the problems start to appear.  The first is that the plastic grease seal on the axle and the outside dust cover are not the same diameter; they are 1mm or thereabouts different.  I could not face trying to find replacements so I put the hubs on the lathe and widened the recess out to take the grease seal.  For the dust cover I turned a pair of filler split-rings that did the trick.

Once assembled other things are wrong.  The heads of the studs hit the cosmetic bolt heads at the bottom and top of the axle-box.  A little angle grinder ‘sculpture’ recessed the bolts and did not look out of place.  The heads of the top bolts were turned down thinner with, again, little cosmetic difference.  So the wheel now turns but only if you don’t try and steer, the stud heads foul the casting near the top of the axle box after about 5 degrees either way.  More angle grinder work sorted that out. 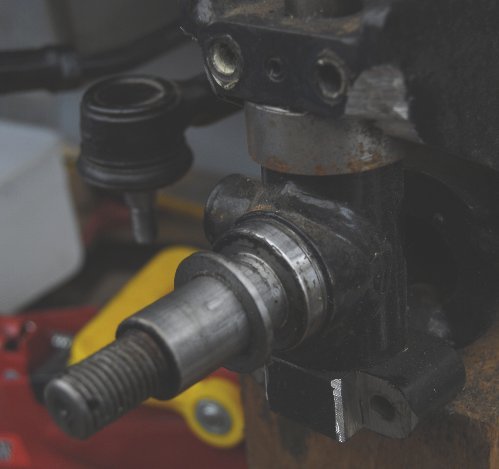 The steering would probably go round another few degrees if the track rod ends cleared the stays going back to the front of the firebox.  I may try making a new pair that drop a little lower so as to get a turning circle slightly better than a super-tanker.
The pin on the steering arm was cut off, moved round and welded on again enough to clear the tyre, about parallel with the bottom of the main pin actually. My poor welding soon failed so I drilled both links out a fitted a new hardened pin.  Given Tim’s problems with pot-holes lately this is probably a good idea anyway. 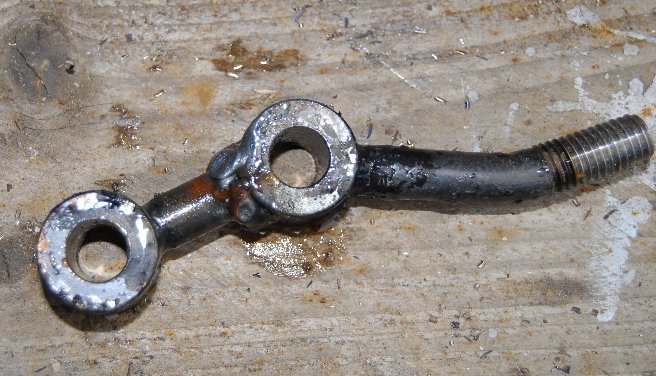 Once done the look is very good, the centre of the pivot pin being in line with inner wall of the tyre just as it is in the full sized engines photos. The only thing left to do is move the mudguards in.  This will need notches cut somewhere as there is only about 5mm  gap between the mudguard and the bottom of the frame channel.  As I only have about 10mm margin to my mudguard lining I may resort to the angle grinder again and sculpt the frame edge each side.  I will post the results when it is done. 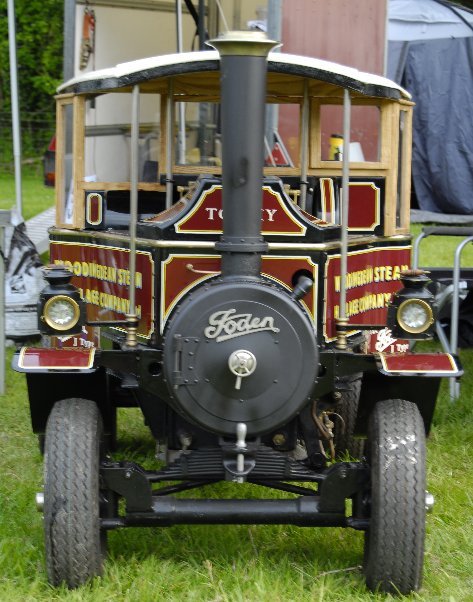 But do you still need to be Popeye to steer it?

No, spanner fingers are sufficient.