For those who have yet to put the front tyres on or for new builders I have come up with a fairly painless way of fitting the tyres to the rims for the fronts if you have not chosen to have them vulcanised.

Firstly I need to say that this deviates from the instructions and STW may feel that it could impair the adhesion but you can read this and make your own choice.

Having built the 4" agricultural and having fitted tyre before I knew what was instore but having looked at the other posts and then having mused over the tyres here I think that in order to ensure better adhesion STW have made the tyre diameter slightly less which makes it even more of a task than the earlier rims. I seem to recall they werent too bad to fit but these looked really tricky. This is also combined with the fact that I have had my wheels powder coated before fitting the tryes so as not to damage the rubber so it makes this job even more troublesome. I have felt for some time that if the tyre could be streched before fitting it would make it much easier and this is perhaps where Steve may feel that this reduces adhesion and whilst I will say that my 4" agricultural has lost both its back tyres I have had no such issues with the front as the weight and sheer force is not as much.

So I have been looking into possible methods and came up with a large flower pot over which the tyre can be forced to the nessecary diameter. Initially I was going to buy a terracotta pot but they are really pricey and then I came across a range of plastic pots. At first I was going to simply ram the tyre down and leave it for a few months but then I realised I could cut the top off the pot at approxiamtely the rim size and use the pot to slip the tyre over the rim. Providing the rim is inside the pot it stops it from collapsing. I had put the tyres in a really hot bath for about an hour before to ensure the rubber was as forgiving as possible. The photos show the method in action. I will say that I then intend to take the tyres off in the new year and glue them then once they have stretched and can come off and on with ease, but you could put the glue on with this method I suspect. Again this is where there may be some discussion as to weather this methods reduces the adhesion but compared with trying to lever the tyres on its a much less stressful job. I'm sure those of you who have fitted the tyres can vouch for the lever method.

Both tyres took less than 10 minutes each single handedly and more importantly the paint and lining were untouched. The pot was £9 by the way but isnt much use after 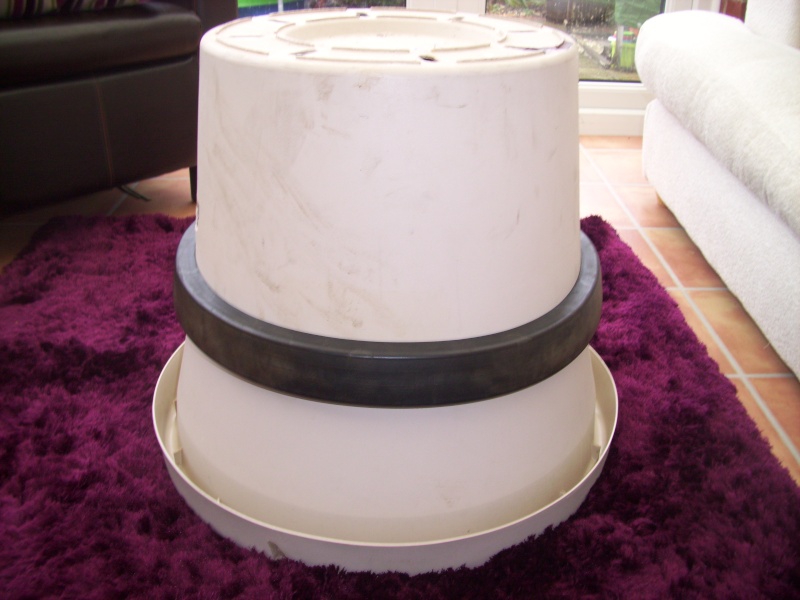 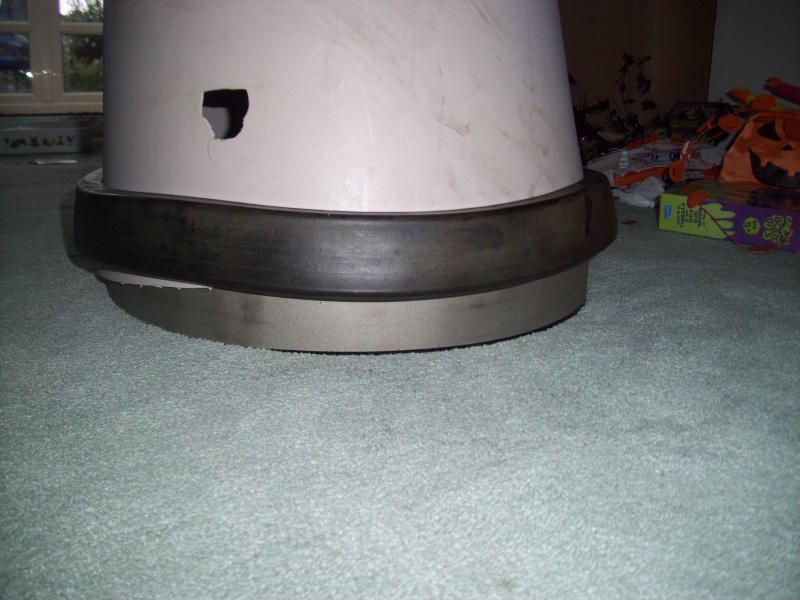 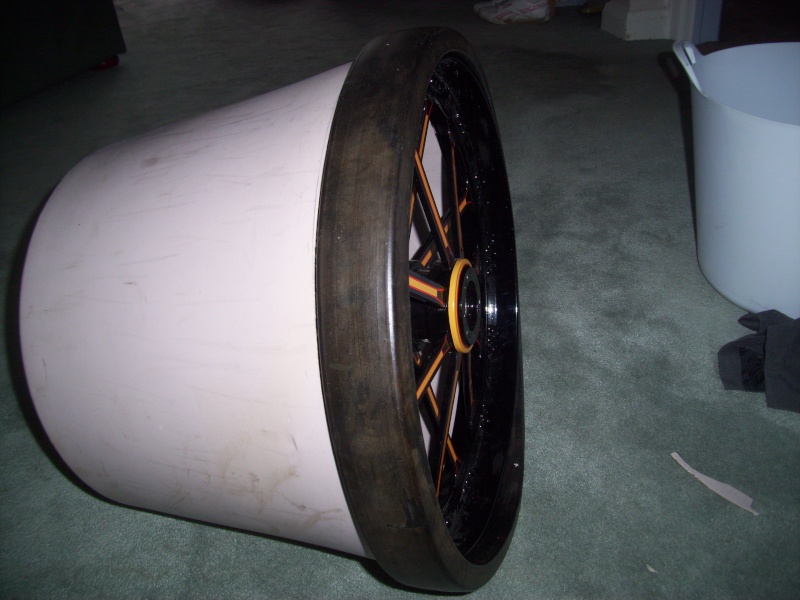 Looks a good method for getting the tyres on the rim dry however when buttered up with adhesive most of it will end up on the plant pot! The method of buttering up both surfaces, cable tieing the lower half of the tyre on the rim & then using tyre levers to fit the top half of the tyre to the rim is still probably the best. To minimise damage to the rim you could use shrink rap or tape on the tyre levers. When cleaning up white spirit works well on the Sikaflex 292 which is what I use in preference to Isoflex. Isoflex is very runny & ends up everywhere, Sikaflex is gunned from a tube and doesn't run at all. It's a marine adhesive & very strong, easy to apply and one tube is just enough to do two back tyres on a 4" Burrell SC. There is no primer, but ensure that the steel is rough & shiney with a belt sander as is the rubber tyre so forming a good key. I use an old butter knife to spread a thin coat on both surfaces then put them together.

. So I have gone for this method to try and stretch the tyres first to then allow the lever method to work once the glue is then added next year. Intially I was going to leave the tyre on the pot for a few months but realised I could get it over the rim so it would be just the right size. As I say there may be some opinions that it will reduce the adhesion but the first engine hasnt shed a front tyre yet due to reduced weight etc so I dont expect this will be an issue but if it does happen the fronts are much easier to re-apply.

Looking up Sikaflex 292 on Google it only appears to be available in white from all the suppliers listed. What's the black equivalent??

My 4" Burrell is finished but I'm interested for the traction wagon wheels.

I used this method on my 4” Agriculture and it works very well. Should recommend it to every body. So thanks for this post.

My mistake it should have read Sikaflex 291 which is the black marine adhesive sealant for sticking the front tyres on. I would definately recommend vulcanising the rear ones though and especially as STW do a really good deal with vulcanising.

This is a good thing

But will you soke the tyer in hot water then glue them on??

I rub the rubber and the rim with angel-grinder before I start. Then I put the rubber in front of the air heather as I want to keep it dry. This makes the rubber soft enough to handle. After I put it on the rim I put a hex 8mm bar between the rubber and the rim and by turning that with a spanner it starts “walking around “the rim. That gives me just enough space to put the nozzle of the gun in, to inject the Sikaflex 221. I’ve been using this type for commercial proposes and it will be rubber if hardened out. On metal the only way to remove is mechanical, for instance sanding it off with a sanding disk.
I did used the flower pot a second time for the bowser by cutting it down again, and as the flowerpot I bought here was only 7,20 it was a good investment.

I put some photos on http://www.miniatuurstoom.nl/index.php?option=com_joomgallery&func=viewcategory&catid=32&startpage=2&Itemid=36#category
Sorry the build dairy is only available in Dutch for the moment.
Alex-Jan