The gear changer was in that kit, but due to it not being ready in time we decided to move it to the last kit.

The roof is going ahead, and will be the next thing we need to order from the woodworkers. Unfortunately we haven't been able to crack on with making it as we have been trying to make progress on the lyka kits first because we have been falling behind. The drawings for the roof are all done though, so should just be a case of making the parts and testing them to make sure they fit.

Thanks Will
just one other thing I found was BU42322 in kit 22A its the pivot pin for the whistle arme, it is mentioned on the iso but its not on the Bom so has been missed out.
I dont need this part myself as I have used a split pin however others may need it.
Simon

Thanks for letting us know, I'll look into it tomorrow morning.

Hi Will
Just wondering if you have any idea on when we are all likely to get the last kit. I’ve seen you got some casting come in the other day on Facebook but curious to when they are going to be sent out.
Thanks in advance

Ethancasey89 wrote:Hi Will
Just wondering if you have any idea on when we are all likely to get the last kit. I’ve seen you got some casting come in the other day on Facebook but curious to when they are going to be sent out.
Thanks in advance

As Craig has said in his production photos thread on here, some of those castings were just not up to the job, they looked awful and to make them work properly would cause them to look even worse! However, those castings are not part of the last kit itself, and will be made rather quickly if we fabricate them. So we are going to send out kit 19 in the next week or so. If it is within the next week then there will be some components missing (the springs for the scraper bars which are on order and should be complete by Friday the 14th, the gear change bracket which Craig is fabricating this weekend, and the gear changer top plate, which can't be proven until we have the bracket). These items will follow a week later if that is the case. otherwise the whole kit including those parts will go out in just over a week. Items like the steering worms and worm wheel will follow a few weeks later (having been checked that they are correct first). The Steam heads and check valves will go out as soon as they come in as we had a couple to try on the control model, and so are proven.

Well the last kit (almost) has arrived scrapers, small weighshaft bracket, eccentrics, gear change etc.
I decided to start with lapping in the eccentrics so after removing the crankshaft from the engine so I could clamp it in the vice, no mess on the paint that way.
First and most important part was pop marking the individual parts before taking them apart that way they will always stay together and in the same orientation. 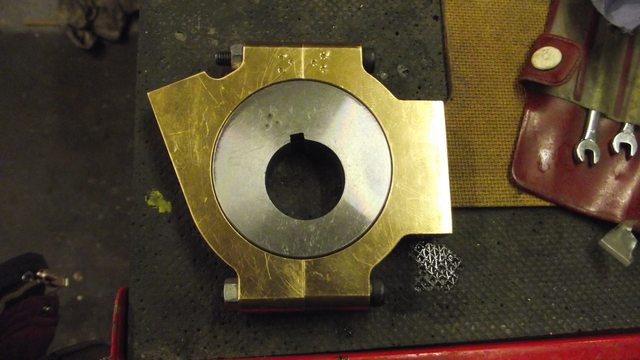 This one is number 3 and will be connected to the water pump shaft.
After putting the 3 parts of the eccentric set together and mounting in the vice. 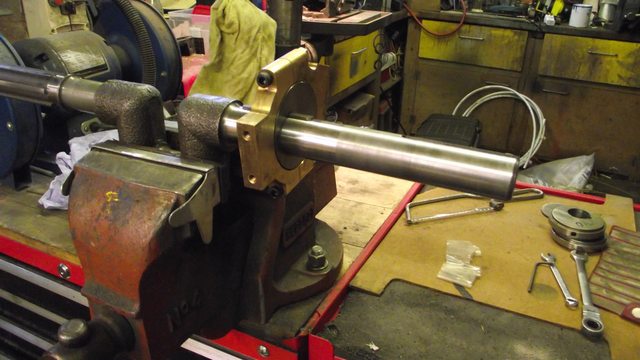 It was not possible to turn at this stage so I had to come up with a little mechanical advantage made from a short bit of flat bar. 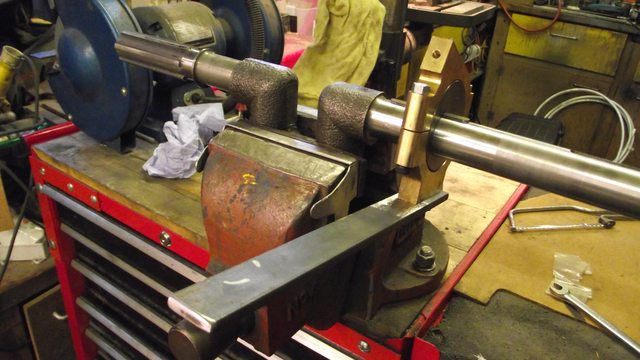 I drilled 2 holes in the flat bar to fix it to the eccentric strap using the 2 M6 threaded holes where the eccentric rod will be attached later.
After applying some lapping paste to the inside of the straps, and only lightly tightening the clamping bolts it was possible to work the eccentric back and forwards until it loosens up then gradually tightening the clamp bolts until fully tight.
A couple of re-applications of lapping paste and a bit more working and the required result was achieved.
A really good clean using cellulose thinners and flushing out the small oil hole using an aerosol brake cleaner is essential as leaving lapping paste in a bearing would not be smart. 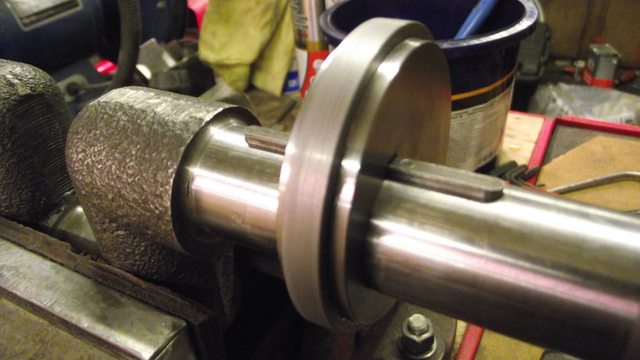 The dull finish is a good thing as it gives the oil something to cling to.
well that was number 1 only 2 more to go before starting on the eccentric rods and expansion links.

A new day and a new challenge first job of the day was to get some color on the small weigh shaft bracket and whilst the oven was on the scraper parts as well. 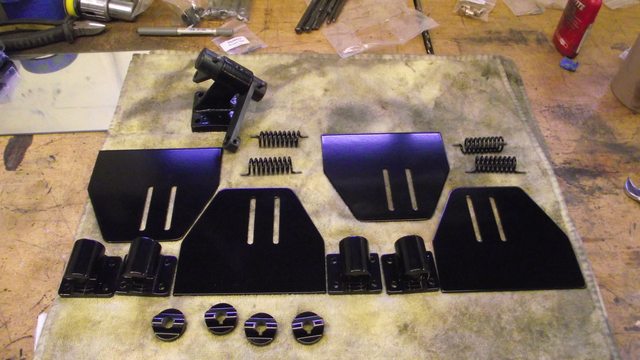 So much for that job after a cupa and some breakfast it was on to the garage alchemy thing and blacking the bits that didn't want painting, mainely the motion parts turning bits that look like this. 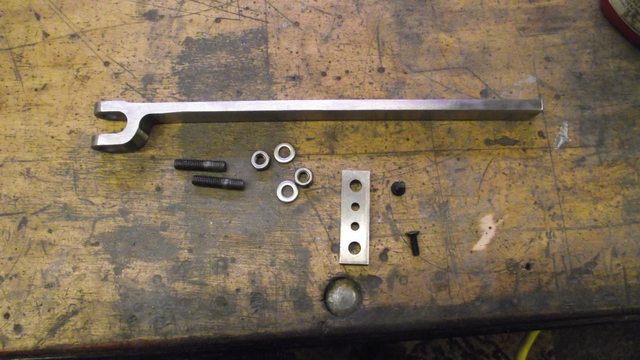 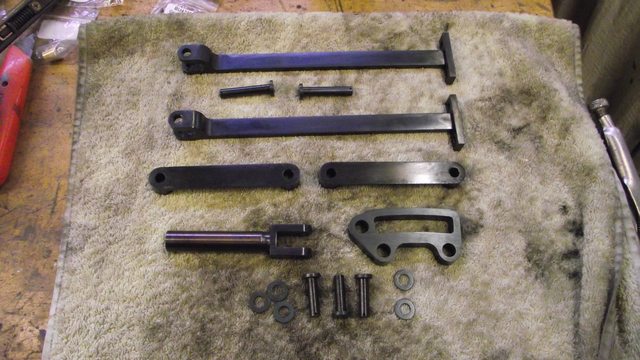 After having my fix of hot oil smell It was time to put the bits together, fiddly at times but deeply satisfying.
A real smart cooky that invented this little gem. 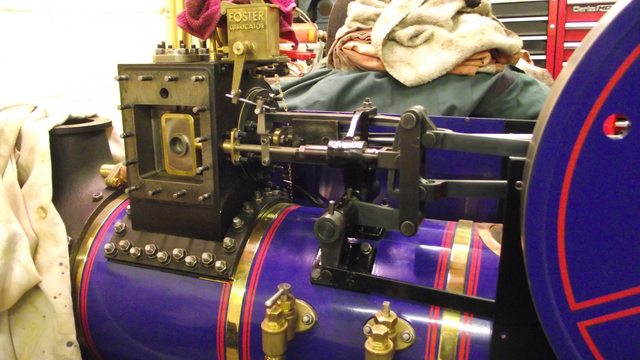 The reach rod was a little problematic due to everything being on the right on the roller it has become a little crowded in the area of the reversing lever.
after a lot of bending and shaping (sorry Dean "tweaking") I did manage to make it come together but the expansion link moves its full travel with only half travel at the reversing lever might re drill the bottom pivot point before I notch the quadrant to increase the movement of the reversing lever.
I managed to centralise the slide valve before the "feed me now" alarm went off so the covers went on, will resume next weekend and who knows might even get a run on air then.

With the steering worm and replacement water pump arm turning up we decide to have a steam up to test it all out. From as far as we know we are the first ones to be at this stage and have done our first 3 mile drive around. Thanks Will for sorting the pump out quickly it seems to work perfectly. https://i.servimg.com/u/f55/20/07/71/10/f361a810.png

Hi folks
In the last couple of weeks since my last post I have been running on air and fitting the last few parts.
A slight hiccup with the water pump connecting rod meant that the 3rd eccentric could not be fitted but that has not stopped the air run.
With the arrival of a new pump connecting rod and the worm and pinion for the steering last Friday it was time to stop playing and start working on finishing.
scrapers first I dont remember seeing any isos for them so made it up as I went along. 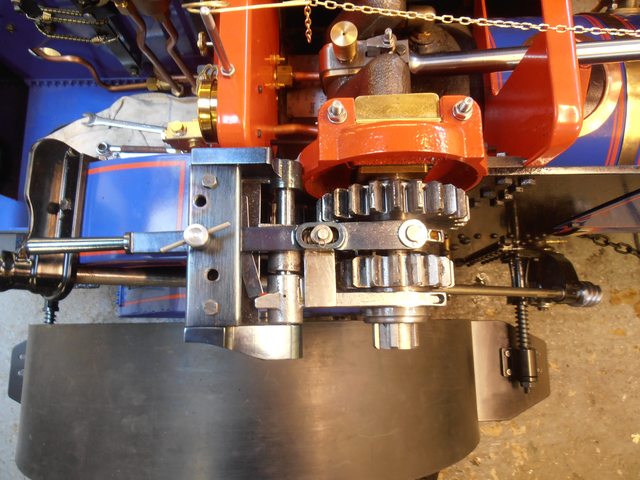 I have put the scraper to the front of the wheel the opposite way up to the one behind, I dont know if this is prototypical but if it is the other way up and gets turned by something on the wheel then it would dig in and ether bend something or cut the tyre.
Mounting the scraper blade below the casting in this way means that it is nearing the wheel centre height so if it accidentally gets turned in either direction it moves away from the wheel.
Ok steering worm and pinion gear this could have done with a little extra length below the collar to allow the backing nut to screw on by a full nut instead of the 2/3 that it has. It turned out to have a nice smooth action with very little backlash well satisfied with that. 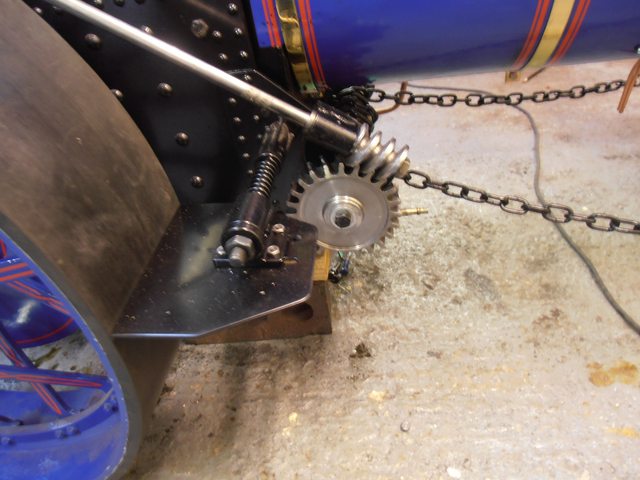 The gear selector was next on the todo list, had to remake the selector plate as the hole seen with the tap in it did not line up in the neutral position. 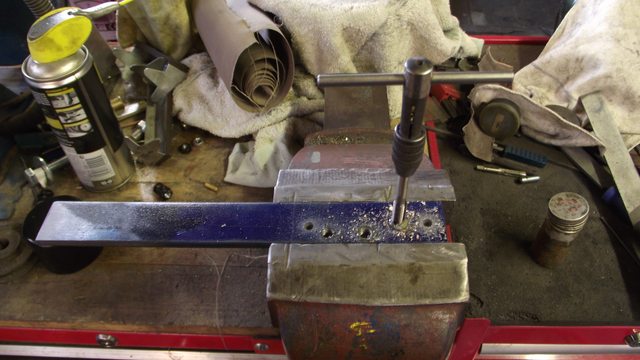 once that was done then it was all polished and blued the same as the motion components.

Finally I put the name plates on I have held back on this until completion even though I have had the plates since before Christmas call me superstitious if you like.
The plates were made by Steam plates ltd it was a real easy process a few Emails and the results can be seen here. 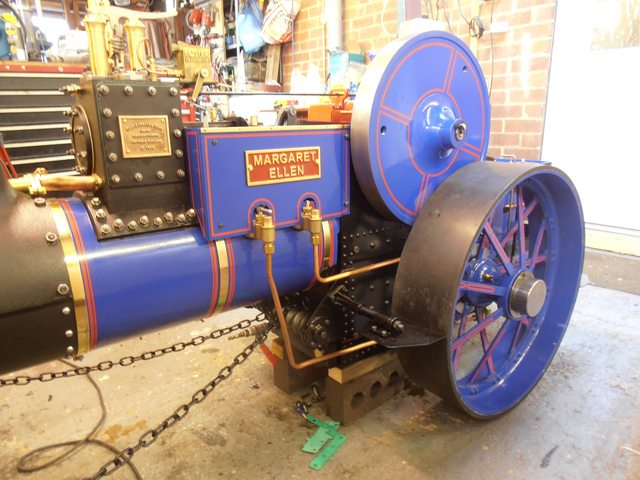 Just left with the job of getting her off the bricks and the boiler inspector booked then all being well road registration time.

Well I have had a fantastic day avoiding viruses I got Margaret Ellen out and in steam for the very first time today. 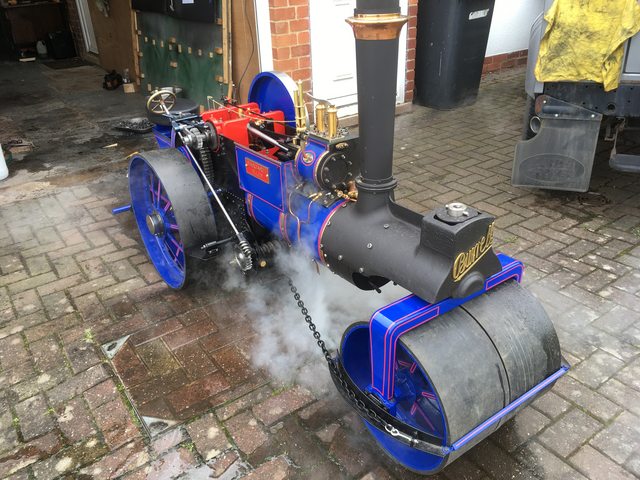 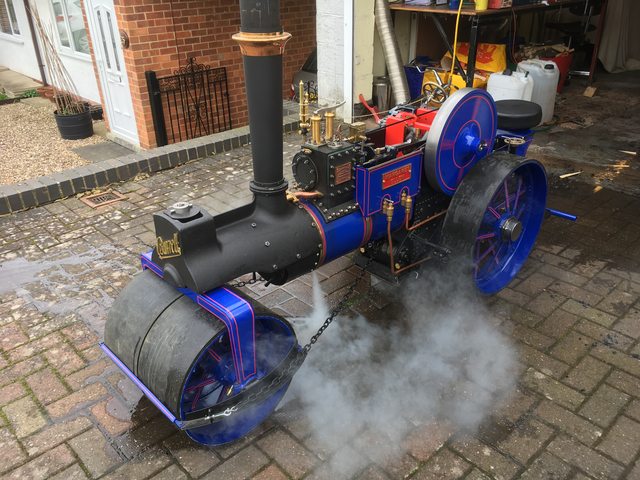 Forgot to mention that these pictures were taken just after the boiler inspector had left.
His parting shot was "Your boiler certificate will be in the post in the next day or so".
Bringing on the biggest grin, so big it hurts and because there isn't any pain killers left on the shelves due to panic buying I will just have to use medicinal alcohol instead.
Simon C

Brilliant job and a credit to you, really getting the steam jitters now, might have to fire up the Burrell soon especially as we've lost so many shows now

My inspector has his wagon all kitted out with inverter and printer, the full works and prints me a certs there an then, also prints two so I can send one off for the NTET Disk

Having my own rally since most of this years are already canceled. 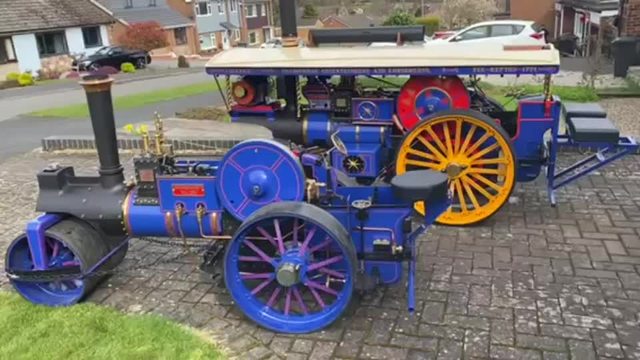 Keep building folkes, and most important stay healthy and well.

Hi folks
I remembered that some place along my thread I complained about the seat being two high for me and that I would post something later well both later and time have arrived so here goes.
the first part of the modification was to remove this bit from the top of the seat support bracket. 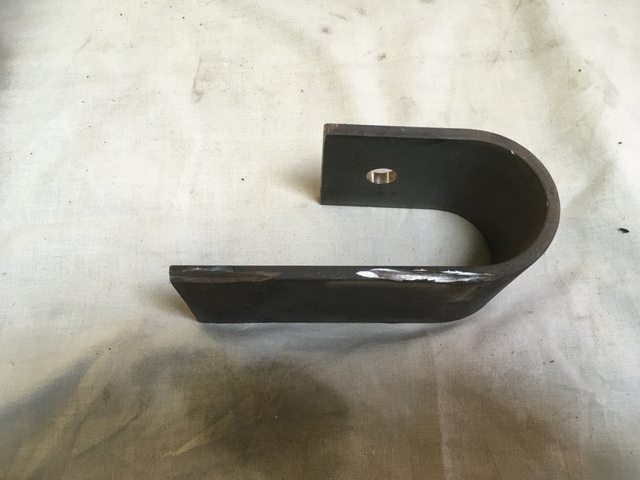 This then required the re drilling of the cushion mounting hole avoiding the web and angle iron hook under the bracket. 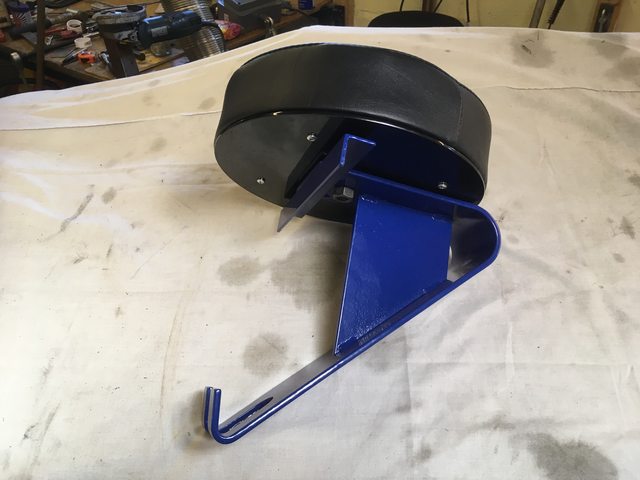 After fitting the seat back on the engine I found it a much improved driving position for me.
However a second concern raised its head, as supplied the lower part of the seat bracket transfers the weight on the seat down on to the tow bracket and also onto the back of the tender. 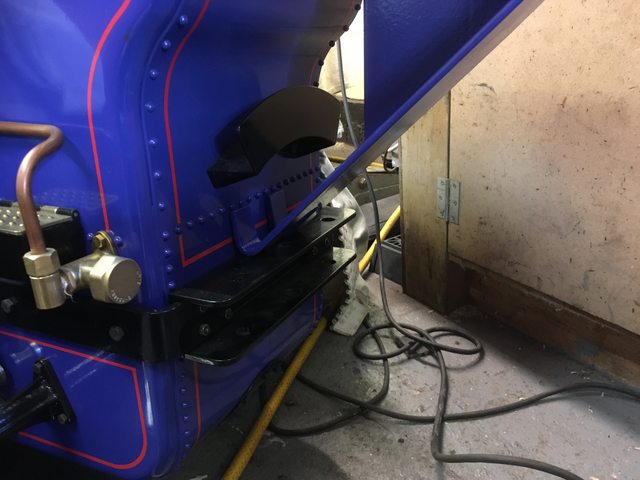 This I thought would damage the Paintwork or even put  dents in the rear of the tender.
The solution I came up with was to put an angle bracket on the foot rest part of the seat. 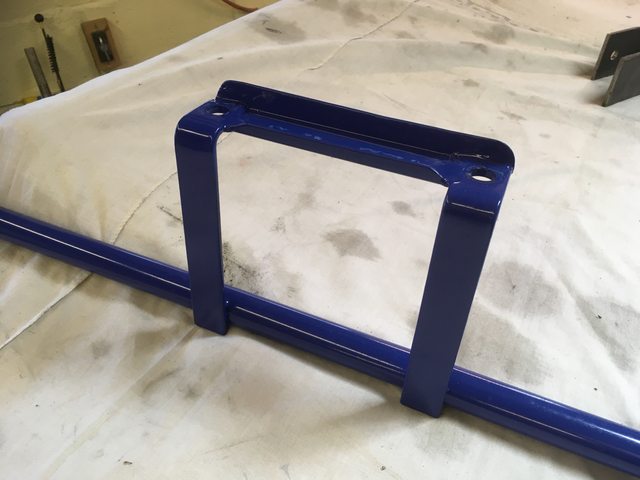 Once fitted back on, the bracket is slightly away from the tender as can be seen. 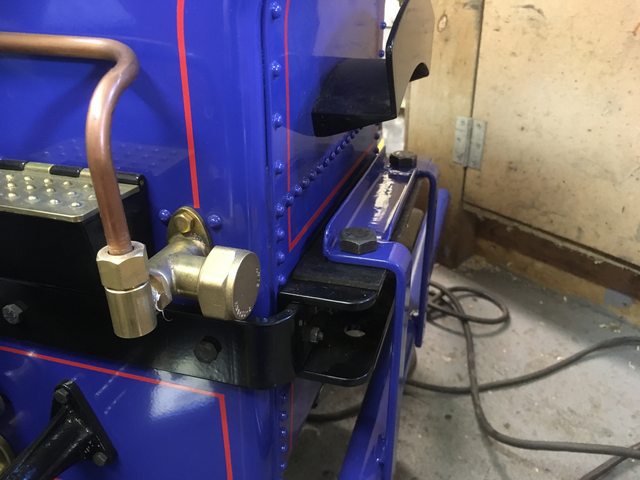 Now with the seat on the bracket it no longer rests on the tender and my shiny paintwork is protected. 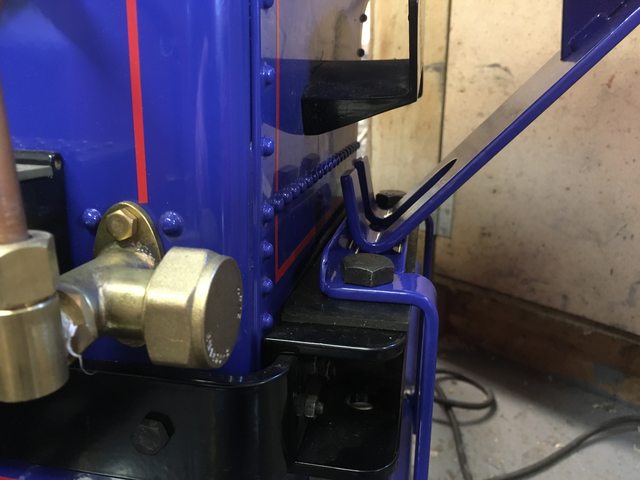 The observant amongst you readers will have spotted the deliberate mistake but so have I and yes I will drill it later.